eat in large quantities. They are a compromise but they are also kind of useful and make a delicious little treat that doesn’t break the health bank too badly. Nutri-Brex are very similar to Weetabix but made from the gluten-free, low lectin, high resistant starch, ancient grain, sorghum. Yes, the sorghum is no longer in its truly whole grain form, which is where they fall down on the optimum food stakes but I’ll forgive them that because, 1. my children like them and I know these are better for them than pretty much any cereal I can think of and 2. they are useful for making these little treats which are shockingly easy to prepare. They are quite widely available in supermarkets too. 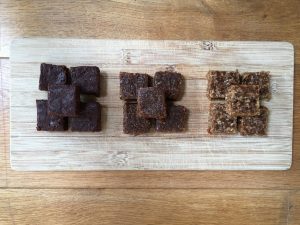 What you see here, from left to right, are Chocolate Bites, Apricot and Almond Bites and Apricot and Vanilla Bites.

The basic recipe is as follows:

Everything goes into a food processor until finely chopped and well combined and then add water in small amounts and mix until the mixture sticks together. This quantity makes enough to go into a lined loaf tin. Press the mixture down and make level. After 2 hours in the fridge it is ready to cut and serve. They can be kept in the fridge 2-3 days or else keep them in a freezer where they’ll last much longer. Cut into these small squares, as pictured above, they are not too hard to bite into directly from the freezer but would defrost quite quickly if preferred.

Specifically the ingredients for the flavours I made are…

This site uses Akismet to reduce spam. Learn how your comment data is processed.

Find out more about the Metabolic and Lifestyle Reset

A no-obligation opportunity to discuss the programme and what it involves.